Earlier this month, I traveled to Cuba for roughly a week and stayed in 2 places: Havana, capital city of Cuba, and Varadero, a beautiful beach resort town.

The first destination was Havana. As we were going from the airport to our Airbnb accommodation, the streets, buildings, and especially the cars made me feel like I had stepped into a 1950’s suburban area. The fact the city isn’t very modernized gave an air of nostalgia and antiquity, which is very different to any of the places that I have traveled before. There is also lots of nature that surrounds the city: grass, clear sky, rivers, etc. Though I would have assumed that the presence of nature would have created an environmentally-friendly city, the (few) old cars were enough to pollute the air – that was the main disappointment.

How was the weather?

Unbearably hot. We went during the hottest and wettest time of the year, and though I expected to encounter annoying mosquitoes, I did not get a single bite (or if I did, I must not have felt them) in the whole trip. I did use repellent every day, just in case.

What places did we visit?

We only had under 2 days to visit as many historically-rich places as we could, but we managed to see quite a few places nevertheless.

We walked and toured around the Malecon, a roadway right beside the beautiful beach. The view is amazing during the day here, as you have buildings (some that are pretty cool) on one side, and the amazing sea on the other.

The one aspect that jumps out at you when you’re walking in Havana, especially in ‘Habana Vieja’ (Old Havana), is that it’s surrounded by history. We walked through Paseo del Prado towards the Parque Central (Central Park), and got a very nice view of the more touristic site of the city before hopping on on a tour bus that took us through mainly historical stops/museums/buildings (names which I unfortunately can’t remember). 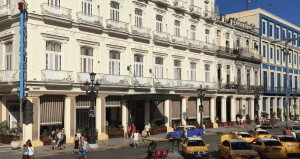 We also got a glimpse of Castillo (Castle) San Salvador de la Punta before taking a cab down the tunnel to the East side of Havana. There, we went inside Castillo de los Tres Reyes del Morro, and though it was huge and impressive, not having a tour guide did make the visit a bit superficial. I was also stumped by the fact that they allowed visitors to see and touch practically everything in the museum – this was evidenced by the litter that people (rudely) left on some monuments. 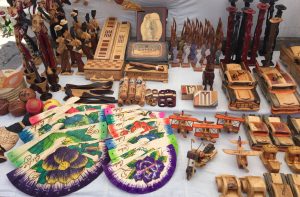 A pretty chic and touristic place we went was Obispo street, a narrow boulevard with lots of stores, restaurants, coffee shops, and museums on the sides.

We also walked inside Colon Cemetery, and that was beautiful. This place reinforced the 1950’s vibe even more, as the cemetery was established in the 19th century. I don’t think I’ve ever been inside a cemetery before, and this first time definitely gave me a lasting impression.

The last place we visited in this city was Havana University. It’s as old and antique as the rest of the city, but it gave me an more ‘abandoned’ sort of feeling. When I glimpsed into the classrooms and hallways, they all seemed dark and dusty.

What about the food?

I found the food to be pretty ordinary. Prior research enabled me to anticipate what kind of food to expect, but I had hoped to find some ‘unique’ Cuban dishes. I was disappointed. The places we ate at offered mainly seafood (obviously), but none really gave me the impression of eating at a Cuban restaurant.

I probably sounded a bit cynical throughout my descriptions of the places I visited, but I actually found this city very culturally-enriching. Havana is not a good place for a vacation, but it’s definitely interesting to see and learn about a city that seems to be decaying.

We took a 2-hour car trip to Varadero, and the whole journey was a beautiful view. The roads were surrounded by green grassland and clear sky, with few cars and – occassionally – a few horse carriages that would pass us by. It’s the sort of place that one would go to get away from all the problems caused by the human civilization (oh btw, did I mention that there’s little to no wifi connection in Cuba?). 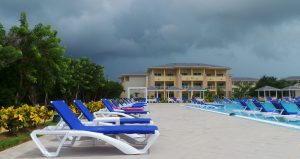 When we got to our beach resort (Hotel Paradisus), I explored the place for a bit. The resort is huge, and has several ‘sections’ separated by long walking distances. We also happened to arrive at a bad moment, as Hurricane Matthew was just striking on the North of Havana (I think?). Luckily, though, Matthew left us in peace the following day, and we were able to enjoy the vacation with (unbearably hot) sunshine.

Personally, I felt stranded and pressured to ‘enjoy’ myself in this beach resort which, needless to say, was very luxurious. But besides the beautiful sea, several pools, and night entertainment, the other few activities that the resort had were not active during our stay (e.g. the aquatic activities, which closed down due to Matthew). I’m not much of a beach or pool person, but the place is great to take pictures with some damn beautiful backgrounds. The night performances were very nice – we saw Cuban dance, singers, musicians, and other performers present a variety of concerts every night.

The resort was alright. It’s not my definition of a vacation/trip, but it was a nice change of environment nevertheless. One thing that bothered me a little, and this applies for the trip in general, was the attitude of some Cubans. Based on research, I found that Cuba is quite a safe place to travel to, but that tourist scams are quite widespread. While we experienced that quite a lot in Havana and not that much in Varadero, the service in the beach resort was not very good at all. I felt it was disorganized and lacked communication among workers, as some people who were supposed to guide us were not up to date on the activities that were going on in the resort. I wouldn’t normally complain about this as it’s not really a big deal to me, but we did stay at a 5-star hotel and pay for the service.

Anyway, I hope this was not a  poorly written travel blog post! I’ve never written one of these before, but I wanted to do it this time so I can remember key moments of the trip. Thanks for reading!