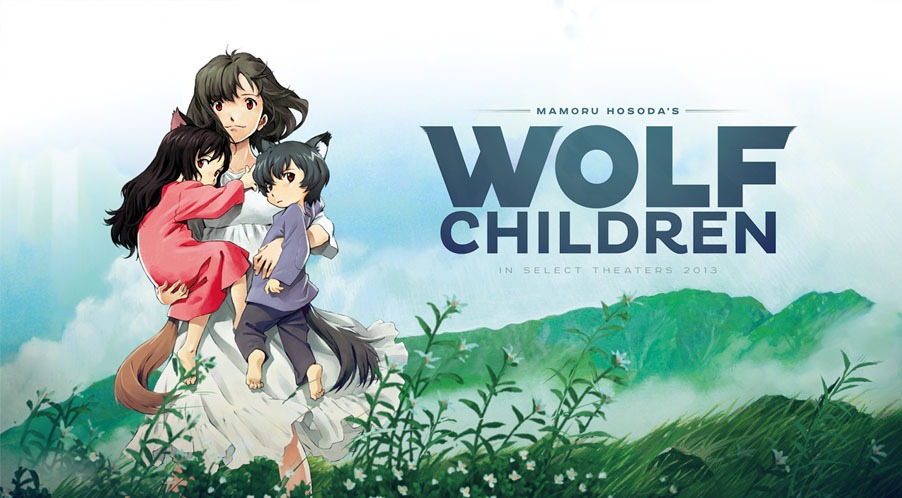 I saw the dubbed version of this film, and I loved it. I thought the (English version) narrators had a soothing and pleasant voice that matched each of the characters. Though the trailer made the film seem more childish than it is, my eyes actually watered several times during the film.

The plot is a very simple one, but the touch of fantasy gives the film a dramatic twist. In a small town of, presumably, Japan, a young female narrator retells the story of her mother, Hana. As a young college student, Hana falls in love with a man who later reveals himself to be a wolf man. Their relationship develops, and during the course of the next 10+ years, we are flashed forward to when Hana gives birth to her two children, Yuki (“Snow”) and later Ame (“Rain”). Despite the changes that the family has to make to get around, e.g. giving birth at home instead of at the hospital to avoid her children been denoted as “wolf children”, and hence be subjected to further investigation that would prevent them having a normal lifestyle, Hana and the wolf man’s compassion enable them to make do with what they are most comfortable with.

However, when tragedy strikes this family and the wolf man suddenly dies, Hana has a hard time taking care of her wolf children. Between working, tending to their needs, and hiding them from the public eye, their lives in the city eventually leads Hana and her children to move to the countryside. There, the children are able to grow more comfortably and freely. It is here where we see Yuki and Ame’s personalities blossom as two opposing individuals. The identities they had as children evolve dramatically as they get older.

On the one hand, Yuki has always been the boisterous and energetic big sister. She’s dauntless and witty. When she starts attending school, however, she realizes that she does not fit in with the crowd. Her idiosyncratic tastes in comparison to the girls at her school leads her to believe that she should do more to fit in.

On the other hand, Ame grew up as the shy and clumsy one. He was by his mom’s side most of the times, and was fearful both as human and wolf. When it is time for him to attend school, like Yuki, he goes through a dramatic change. Unlike Yuki, however, the social pressure makes him recoil towards his wolf self, rather than blend in with the human crowd.

What I loved most about this film was definitely seeing the characters’ develop through the struggles of a clearly atypical lifestyle. Hana’s strength as a wife and mother is admirable, and her difficulties understanding and raising her wolf children never take away her cheerful and optimistic personality. As for the children, the people they grew up to be (as teenagers) was definitely different to what I had initially thought. I had believed that they would both embrace their wolf-human personality; however, it is clear by the end of the film that they cannot live as ‘both’, and both have chosen to embrace one identity over the other. The fact that they chose to left the other identity behind does not mean it stops being part of them, which makes their transition into teenage-hood even harder. Nonetheless, I believe the film showed beautifully how social pressures, parental guidance and external influences can create two people with completely opposed identities (Yuki and Ame), despite having the same upbringing.

On the surface, the film seems quite childish. But if you have watched, or choose to watch, the film, you’ll see that it definitely deals with issues that go beyond that of a simple film. Though there’s a conclusive and somewhat-happy ending, it’s clearly not the “happily ever after” of a children’s film. This film really resonated with other Studio Ghibli films that I have watched (despite it not being one), precisely because of the depth that it goes to portray the characters.

Recurring theme that you may have noticed from these anime films is identity and social isolation. All the characters struggle with their identity not necessarily because they are different from those surrounding them, but because they deal with bountiful amounts of inner conflicts that leads them to feel isolated from their surroundings. It’s definitely a theme that many individuals can relate to, and the fact that these films portray their complexity to its finest is just beautiful.

I hope this review encourages you to watch the film, as well as other anime films!